I've lived in California for 24 years this year, and despite no small amount of traveling throughout the state, there remain countless corners and crannies which I have not explored. In fact, despite having driven to and from San Diego dozens of times, there are entire communities which I've seen only through the windshield, having never taken the time to stop and pay a visit.

Ventura was one of those towns, until last week. I'd been tapped by one of the organizers of Craftcation to present*, and it seemed not only like a good opportunity to meet and mingle with crafty types, but to experience a coastal California community that was new to me.

I carpooled down with my friend Susie, also presenting at the conference. Barreling down the 101, we chatted about food (natch), entrepreneurship, life in general. There was nary a quiet moment between us. Still, it's a five-plus hour drive to Ventura, so we stopped off at the Mission San Miguel to stretch our legs, get some fresh air, and partake of picnic goodies we packed. This, my friends, is what happens when two avid food enthusiasts pack a picnic: 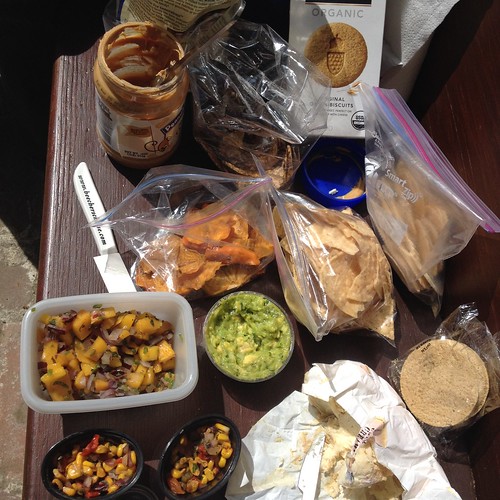 To go with our various crackers and chips, we had peanut butter from Peanut Butter & Co., Duchy Originals oatcakes and shortbreads, Cowgirl Creamery Red Hawk, dehydrated persimmons, and a few condiments I had to make on assignment: Mango salsa, corn salsa and guacamole. We were well sated.

Mission San Miguel makes for a pleasantly serene stopoff en route. Basking in the warm sun and gentle breeze, we enjoyed the grounds, particularly noting the way the stucco had been meticulously maintained to a state of half-erosion to give it an authentically rustic feel. 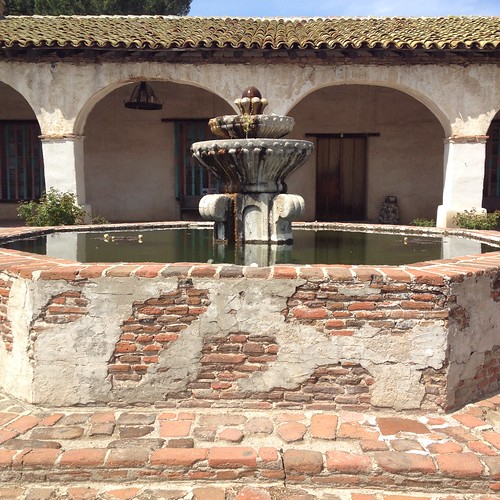 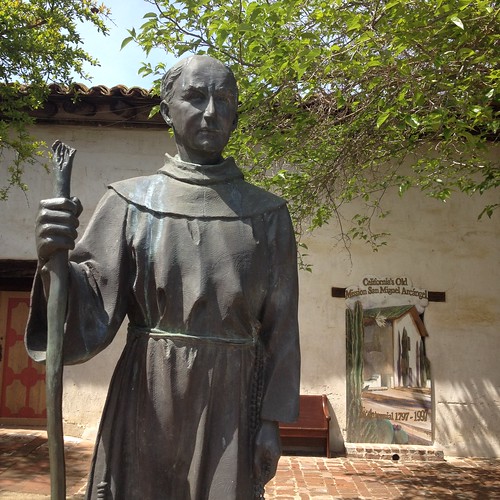 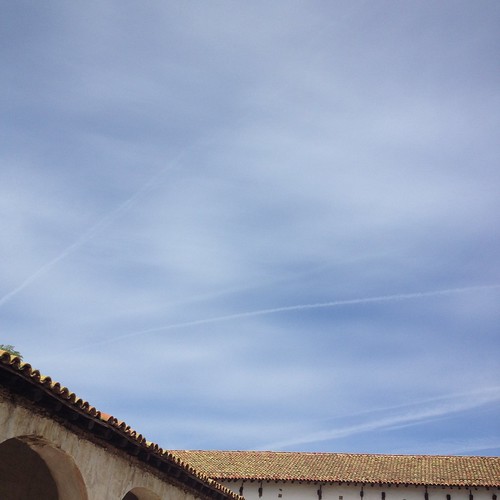 Ventura is a small city, with the rail and freeway forging a barrier between the town proper and the waterfront. The town is almost impeccably clean, yet it still harbors some of the quirk and grit that inevitably occupies coastal communities. A few things I didn't know about Ventura:

It is the birthplace of Perry Mason. Now you know. 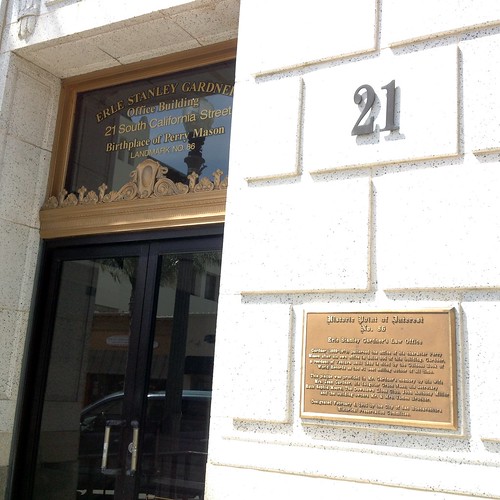 It is, apparently, one of the great thrifting destinations in the country, with numerous thrift stores along Main Street that range from the vast and junky to the more curated. Many of the larger ones benefit non-profits, and at least one needed a copy editor. 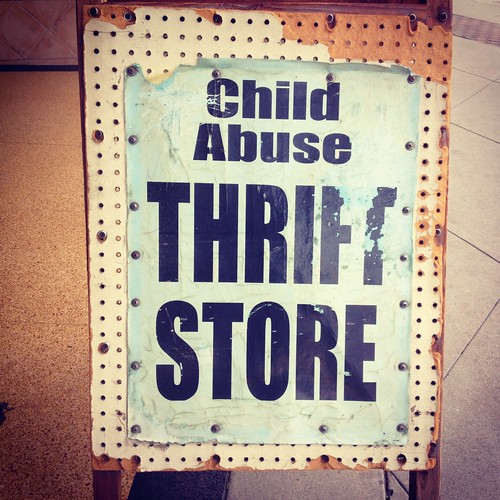 Among the better organized but still tremendous thrift stores was Times Remembered, which was positively chockablock with all manner of curios, collectibles and other creations. Like this collection of racist cookie jars and bricabrac. 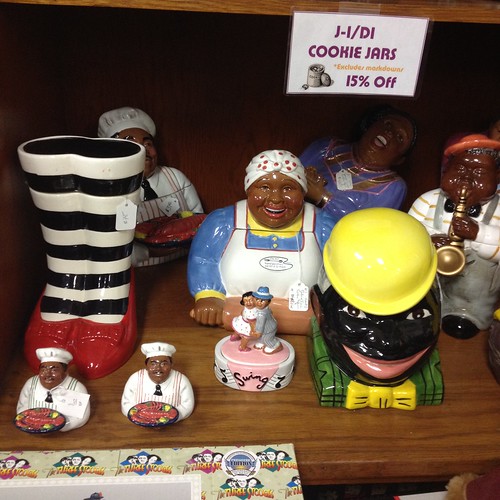 And it has food. Good food! On advice of Delilah and Nicole of Craftcation, I dined with a few folks at Spencer Makenzie's, a retro fish taco joint not far from our hotel. The signature dish is the GIANT fish taco (emphasis theirs), on a full-size flour tortilla. I went for tempura fried versus grilled, and opted for the Brooklyn style, a combination of their Spencer Sauce and Sweet Chili Fire sauces. I then proceeded to dump a container of their hot salsa all over it, without first tasting it. Word to the wise: Their hot salsa is volcanic. I cried. I had a few regrets the next morning. But I'd get the taco again. 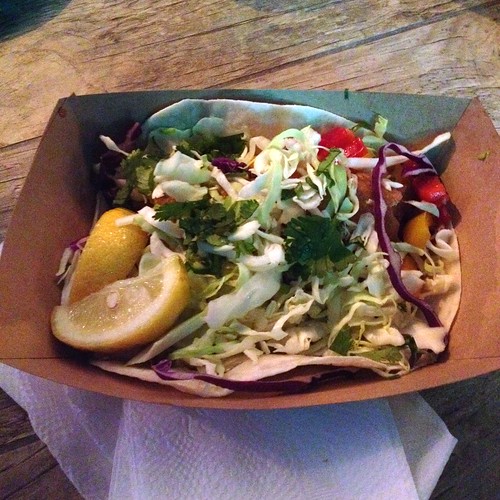 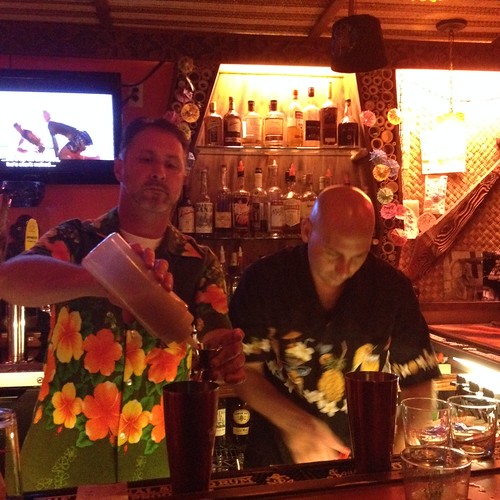 About a 15-minute walk down the beach from downtown, The Jolly Oyster sets up their trucks in the state beach, selling oysters and clams they farm in the waters off Baja California. Saturday night, we dashed to make it before they shut down at sunset, but just missed the kitchen. They were gracious enough to make us a couple plates of raw oysters on the half shell. 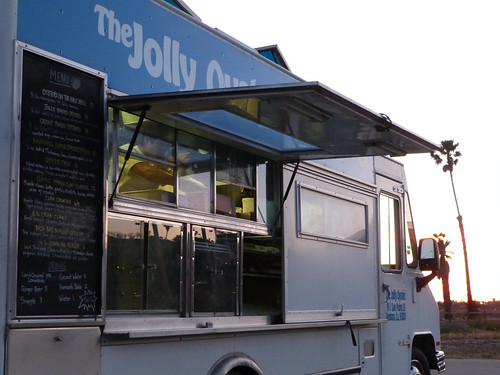 But Rachel  of Chicks with Knives and I were not content. We high-tailed it down on Sunday morning to catch them as they opened and sampled some of their other wares: Fried oyster tacos on fresh-pressed tortillas, Creole BBQ oysters and steamer clams. Aw yeah. 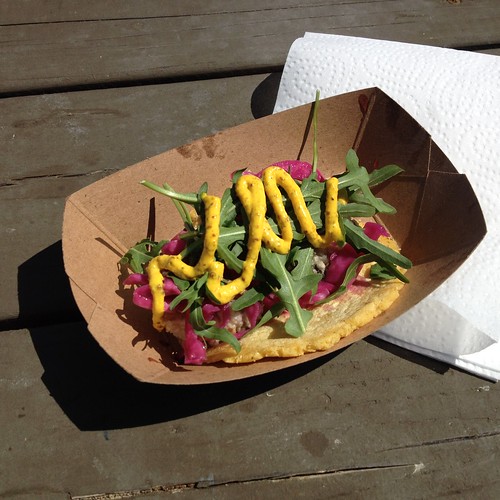 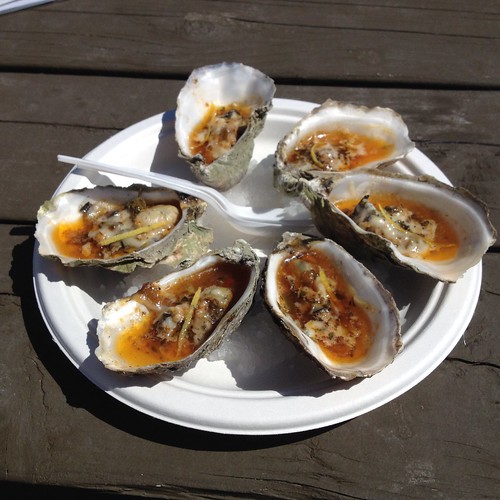 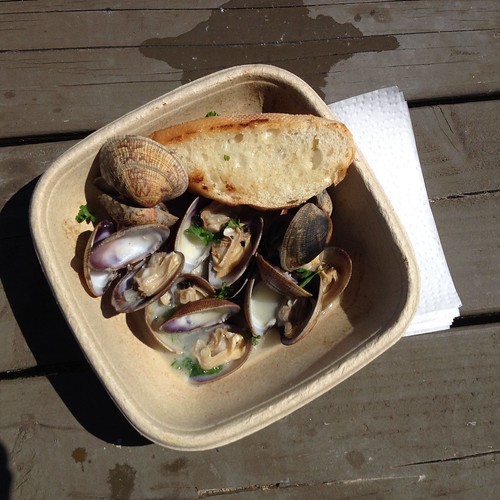 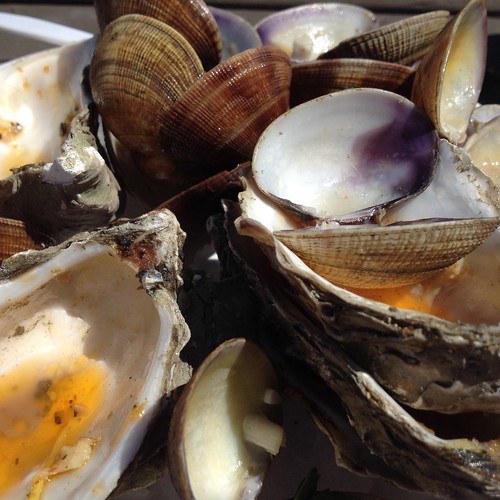 Even in my limited time, I feel like I got a taste of the place, and it left me wanting more. Someday soon, Ventura, we'll meet again. 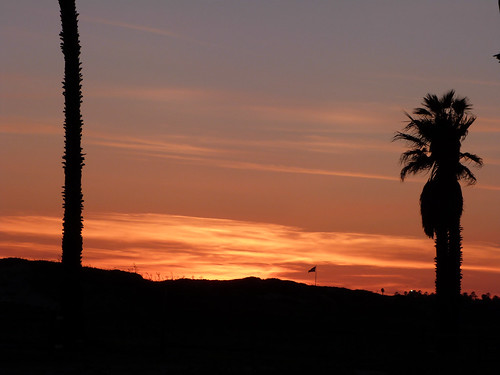 * At the conference, I led a session on preserving peppers and on crafting jars for food gifts, and was also on a panel on food blogging alongside Aida Mollenkamp, Susie Wyshak and Randy Clemens.

Where to go next

I didn't post anything on 9/11. While on the one hand it seemed a little…

The city of dreams

Ack, it's been over a month since the dinner party I keep trying to write…