After losing Reese in January, we took a break. We needed time to grieve, and to live our lives dog-free for just a little bit. We had some travel planned, first a week in Mexico with friends, and then a trip to LA and Orange County to visit family and attend a conference at the beginning of April. So, we agreed not to rush into getting another dog until after that was over.

While visiting my mother, one evening dpaul and I were walking her dog. “I miss walking a dog,” he said, to which I replied, “yes, but I don’t miss having to walk a dog.” Still, I knew it was not long before we’d bring a new companion into our lives. It certainly wasn’t.

The entire time from Reese’s passing through our travels, dpaul was actively window shopping, combing the rescues from as far south as the Peninsula and north into Sonoma. We knew we wanted another terrier, generally of the same size and temperament. dpaul kept gravitating back toward black and tans, but I was less enthusiastic about trying to duplicate Reese. I didn’t want a dog that would remind us of her, to keep that wound raw and fresh.

While still in Orange County, he found one on Rocket Dog. Spinner, as he was called, was listed as a Jack Russell terrier and just 18 months old, so we braced ourselves for a frenetic, high-maintenance dog. Even before meeting him we began to fall in love with his picture, wild-eyed, with a tongue lolling out of a wide-mouth grin. dpaul put in the application even before we came home.

On a sunny April morning, we met him and the foster parents in a park in Corte Madera. They had come down from Ukiah. The implication was that, barring anything unexpected, it was a one-way trip for Spinner. An hour later, he came home with us. 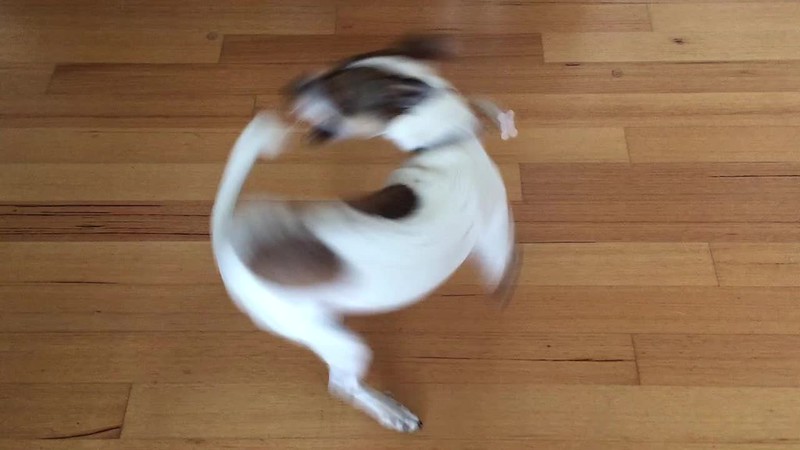 He was given the name Spinner because he does little spins when he gets excited. However, we didn’t like the name, so we changed it to Giro, which means spin or turn in Italian. We kept the provenance, but made it our own. He took to it immediately.

Training everyone else on the name was another matter. Though it’s a short name, just four letters and two syllables (JEE-ro), there was much unexpected confusion:

Though we were anticipating Jack Russell intensity, at first he was withdrawn. He ate little, and silently padded around the house like a ghost. It wasn’t until a couple weeks later that his real personality began to emerge: Playful, loving, silly, and far more mellow than we expected. He’s the darling of the dog park, and loves to play with everyone and everything there. With his long legs and high waist, we think he’s part whippet, especially when he runs.

He is in almost every way the polar opposite of Reese, and that’s a good thing. He’s not a replacement for her, but a welcome distraction. The Reese-shaped hole in our hearts hasn’t been filled; instead, we found room in our hearts for a new friend.

For better or worse, having a dog involves a forced foray out into the world…

Reese is one lucky dog. Surrendered in Manteca supposedly for having too many puppies (a…