The Eatsdropper is too old to bartend

So I turned 45 last week. The salt has nearly overtaken my pepper. I'm fatter than I'd like, for reasons that are not even remotely mysterious. I make less money than I'd like at this stage, but as a result of deliberate decisions I've made over the past few years that I wouldn't change on a bet. I skidded into my 46th year on the tails of an inspiring trip to New York to bond with my colleagues at About.com, a fabulous week-plus of sun and relaxation with friends in Playa del Carmen, and a whirlwind conference in Las Vegas where I had a couple speaking enagements. So, all things considered, I'm right where I want to be. And now, your periodic dose of audible amusement.

Shopper: "You hike up to this spot that this guy named Ansel Adams used to hang out at. I guess he was some sort of photographer."
– Eatsdropped by Susan at the Ferry Plaza Farmers Market

Bubbly young man, in a tone of delighted recognition to café pal: "She was eating one of those sausages when I met her!"
– Eatsdropped by Liz at Russian River Brewing Company

In line waiting for a sandwich: "He was a very nice guy. Probably very stoned."
– Eatsdropped by Susan at Rhea's Deli

Guy on street: "Is he at a church or a bar? I can't tell the difference."
– Eatsdropped by Ezra on Melrose Ave in West Hollywood

Diner: "He's too old to bartend. He's like, late 30s."
– Eatsdropped by Brittney at Beretta

Dudebro, to other dudebro: "I don't want a whole restaurant. I just want more booze."
– Eatsdropped by yours truly on avenida Quinta in Playa del Carmen

Apparently, the good folks over at Anchor Distilling (by way of Wagstaff Worldwide) know I like booze. Good booze, specifically. And lately they've been gracious enough to invite me to a few events to sample some of their wares.

Back in August we went to Wingtip, the très swank private club in the Financial District, to meet a cocktailian legend, Alessandro Palazzi of the DUKES Hotel in London. The DUKES garnered a fair bit of fame by being the regular haunt of none other than Sir Ian Fleming himself, and it is believed that it is where he acquired the inspiration for James Bond's propensity for martinis "shaken, not stirred." (Though, in fact, Bond is at least as famous for creating a cocktail all his own, the Vesper.) Palazzi was here to showcase his take on the classic,  dubbed the DUKES Classic Dry Martini. 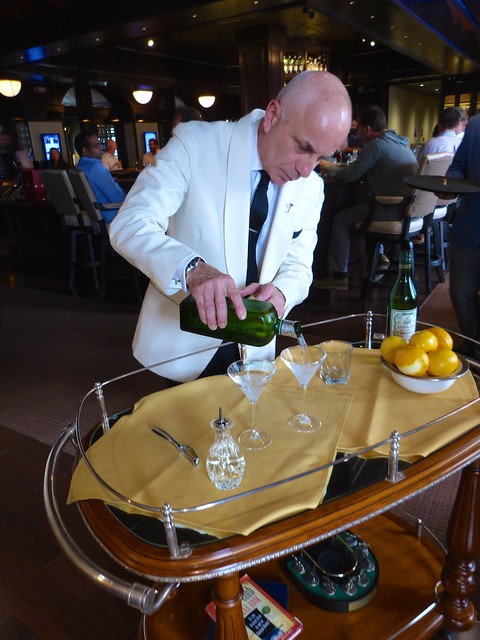 Palazzi, a slight man in a dapper white shawl-collar tux, wheeled up a wooden cart adorned with just a bowl of Meyer lemons, a crystal bottle with a shaker top, containing his house vermouth, and a bottle of No. 3 Gin (represented by Anchor Distilling). No. 3 is a London Dry Gin which starts out as a neutral spirit infused with botanicals including the classic juniper, angelica and sweet orange peel, but somewhat uniquely also grapefruit peel, lending a fresher citric edge. Speaking softly with a pronounced Italian accent, Palazzi explained that he uses No. 3 in combination with citrus, specifically Amalfi lemons from Italy back in London, as opposed to the classic olives to enhance the natural citrus aromas in the gin. (The recipe is on the No. 3 Gin site.) Out of respect for local ingredients, and because you cannot bring lemons into the state of California, he used meyers on this day.

Two bracingly chilled cocktail glasses were delivered from the bar. At the DUKES, cocktail glasses are chilled in the freezer at least 24 hours; this chills the cocktail right in the glass, eliminating the need for stirring or shaking, and thereby not diluting the cocktail. A scant few dashes of house vermouth went into the glass, swirled around the interior, and in went the gin. He cut a slice of lemon rind, twisted it over the top to release the oils, and dropped it in. Like so:

I am certain that Bond would approve.

Anchor Distilling has also recently begun to represent Tempus Fugit Spirits, makers of classic amari, liqueurs, absinthes, cremes and, now, vermouths. They hosted an event in their private bar on the rooftop of the Anchor Brewing building in Potrero Hill.  (My friend Emily was there, too.) 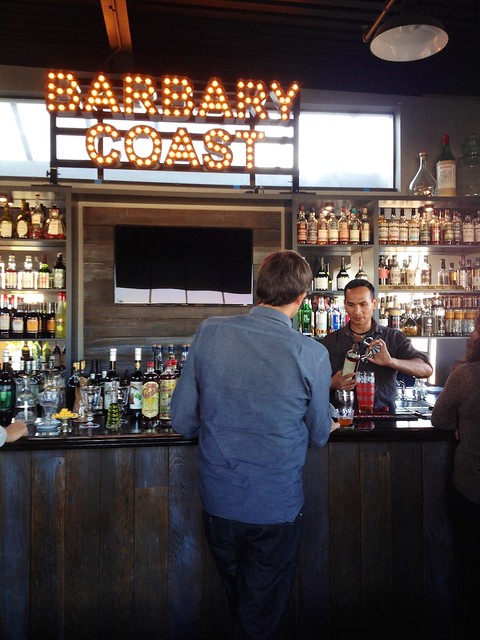 Founder John Troia was on hand to talk about the product line, of course, but much more than that. Troia is a treasure trove of information on vintage European spirits, many of which Tempus Fugit is bringing back from the virtual grave. One of them, Gran Classico, has been a mainstay in our house for years. Modeled after a defunct recipe for Torino Gran Classico, a classic amaro from Turin, it comes off initially with a similar bitter-sweet balance as others like Campari, but far more complex. I was not as familiar with the rest of their offerings, but I certainly am now.

I recently was invited to check out the new Steep Brew Taproom at Whole Foods SoMa as a guest. It's the second taproom in a Whole Foods in the city, probably the last. (The other is in the Potrero Hill location.) I enjoyed chatting with curator, Wesley Anderson (yes, that's his real name, and no, no relation) about his philosophy for the place. Wes is aiming to keep the selection mostly local, strongly focused on small-batch and featuring brews that are not available in the cold case. In particular, I enjoyed the Faction Brewing Summer IPA, with crisp notes of grapefruit zest. But mostly, I was intrigued by the way Whole Foods blurs the line between simple marketplace and community center. It's fitting then that this collection of overheard morsels comes from three different Whole Foods.

"It was bad. The Phil Collins phase. When you listen to 'Take a Look at Me Now' without any irony."
– Eatsdropped by David E.

A mother speaking to her 6-ish son: "Let's get out of here now, before anyone we know sees us."
– Eatsdropped by David C.

Happy Friday, kittens! I'm just back from a few days in Sacramento for a fun and informational trip with Muir Glen. I lived there for a relatively brief stint 24 years ago, and was really blown away by how the city has changed. With a maturing food scene and non-crippling housing costs, I almost wanted to move there. Almost. Anyway, enjoy today's installment of auditory morsels from the City by the Bay and beyond. (And be sure to click through on the eatsdroppers' names to see who some of these cool people are!)

– Eatsdropped by Hugh on the 22 Filmore

Mission hipster: "Did you know that pasta is just literally flour, water and eggs? I KNOW! I know! I know!"

– Eatsdropped by Shaun outside Mozzeria

– Eatsdropped by Nick at a restaurant in Pacific Grove

Neighbor: "Aww shit! Kate's got the smoker going. Our dinner's gonna suck compared to hers."

– Eatsdropped by Kate at her home

– Eatsdropped by yours truly at the Ghetto Pig Roast

A photo session with Erin Scott of Yummy Supper

I'm a member of the San Francisco Professional Food Society, a local networking group for folks engaged in all aspects of food, be they chefs, producers, writers and whatnot. Within the organization we have various Special Interest Groups, or SIGs, where we can meet up to socialize and learn. These SIGs really are worth the price of membership.

Today the food photography SIG met at the beautiful Berkeley home of Erin Scott of the blog Yummy Supper, and the soon-to-be-released book of the same name. Although self-taught, Erin has become an accomplished and skilled photographer, and she had us over to share some tips and talk about her process. 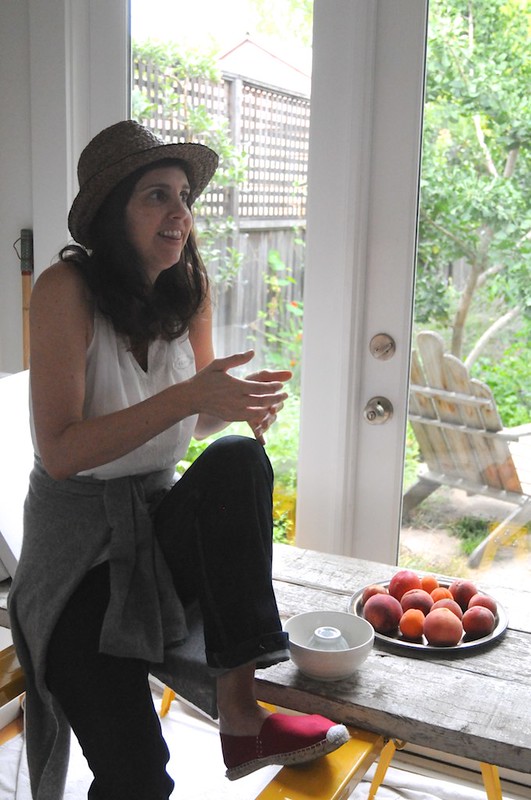 She's got a clever setup in a room off her kitchen, with large glass doors that allowed the soft, foggy light in. Saw horses and weathered wood boards become an instant tabletop, which she changes up with textiles and other props. She had some clever ideas about capturing light, like using prefab canvases from art stores as ready-made bounces, and also has a massive bifold bounce that stands behind her, helping further to fill in light as needed.

read more
Back To Top