Disclosure: I was compensated by Negra Modelo to attend this event, post about it on social channels, and write this blog post.

I'm not going to mince words about it: Sometimes being a food blogger has pretty awesome perks. Like when your go-to Mexican beer approaches you with an opportunity to take a culinary tour of the Mission District with Rick Bayless, and pay you for the privilege. Twist my arm.

We kicked our tour off at a well-known "Mexicatessen" on 24th street, a place I know well thanks to my affiliation with Edible Excursions. (Note: Due to some regulations, I cannot name the places we went to. I know, weird.) This place receives enormous amounts of dry corn on a roughly biweekly basis, which they grind and mix with water and lime (calcium hydroxide, not the fruit) in a process called mixtamalization. This unlocks the bioavailability of nutrients in the corn. They then use this mixture, called masa mixtamalisada, to make fresh tortillas, huaraches, sopes and other delicacies — all by hand. This is my go-to spot to buy fresh corn tortillas, crema salvadoreia, and fabulous salsas. 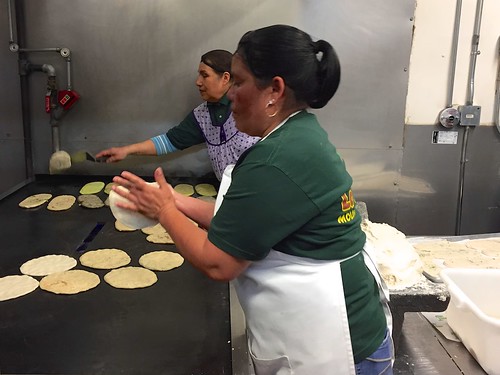 (Sidebar: Come take our tours in San Francisco, Oakland or Berkeley! If you book a private tour for a group of 8 or more, you get a free tour for two for yourself. I'm just one of a whole fleet of awesome guides with Edible Excursions.)

Piping-hot huarache stuffed with cheese and herbs, topped with grilled flank steak and cabbage? Don't mind if I do. (Washed down with Negra Modelo, of course.) 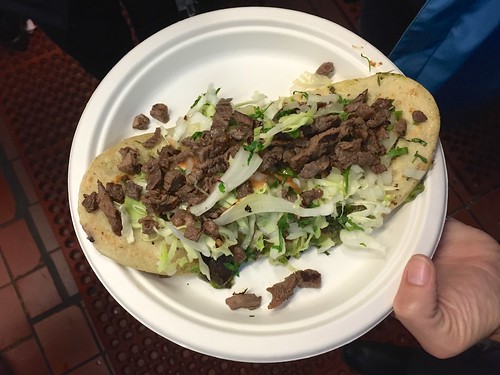 Speaking of flank steak, our next stop was a nearby meat market, family-owned for more than 40 years. The second-generation owner, Salvador Vazquez, explained that until the '70s, the beef commonly used for carne asada was not widely available in America outside Latino markets. In the mass market, it was usually thrown in with other less desirable cuts for ground beef, but in Mexico, it's treasured for its intensely beefy flavor. A friend observed Vazquez carving out the section of the cow containing a few cuts of thin, flat steaks for use. 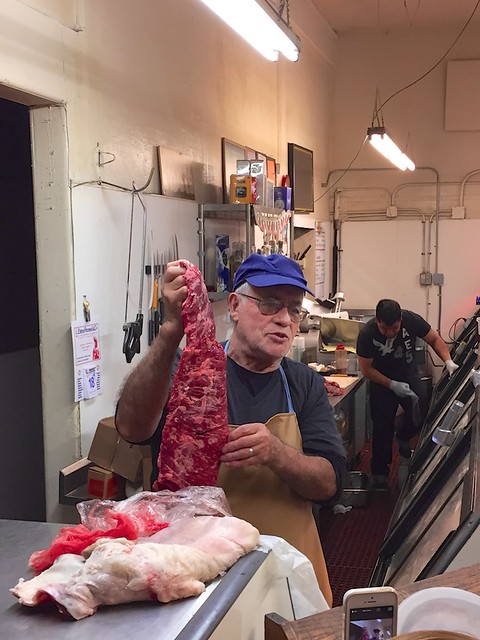 He asked Vazquez what these cuts were called, and for lack of a good translation called it "flap meat." The friend asked him to show a colleague, who turned out to be a rep with IBP, and before long flap steak became available as a grocery store cut across the country. What was once considered all but a disposable cut is now marketed as flank and skirt steak, and for a premium price at that.

It's that time again, friends. Loyal readers will know that I am a volunteer walking tour guide through City Guides, and that May and October are months wherein we lead special tours, such as new tour debuts, or just less…

It's that time again. Each May and October CityGuides rolls out the red carpet for the nice weather, expanding their already aggressive schedule of tours to include ones that are available only during these fleeting, delicious months. Here are the…

I sort of took a hiatus on City Guides tours during the month of June, after the glut of them I took in May. At this point I do not have any firm plans to attend other tours (though if…

CIMG1486, originally uploaded by Sean Timberlake. I'm a little behind in my blogging ... but I had a lovely and relaxing weekend! So Saturday turned out the be the last in my series of May's CityGuides waking tours I vowed…

What the hell happened to our May weather? Yesterday I spent two whole hours schlepping up and down stairways in Russian Hill in chilly winds and occasional drizzle -- and that doesn't count the one hour each way it took…

For the next in our series of May walks with City Guides, we did the Dogpatch & Potrero Point tour. And what a glorious day for it! Under a sometimes baking sun, we strolled through this industrial yet entertaining neighborhood, learning a bit about the geology, geography, architecture and (occasionally sordid) history along the way. And, yes, we also got a gander at the Hell’s Angels headquarters too.

This is the kind of tour I love most — getting under the skin of a neighborhood whose history and appeal may not be immediately apparent. I also have a thing for industrial landscapes, so this tour worked for me on every level. If you want to take it, stay tuned for the summer schedule to see if it will be offered again then; otherwise you may have to wait until October.

More pics and notes after the jump.

OK, so I flaked on Bawdy & Naughty last Monday, but only because I didn’t want to get caught up in the craziness of the immigration protests and march downtown. But today I struck out as promised and attended the Discover Walk: Mission Creek tour this afternoon.

This is an area I am actually pretty familiar with. When I was working at Harrison and 3rd,  would frequently go on walks all through the area from South Beach past the ball park and eventually along Mission Creek. Back then, the Mission Bay Project was just really getting off the ground, developmentally. None of the condo buildings had yet broken ground, nor the UCSF campus buildings, and the Third Street Lightrail seemed an impossible goal. Amazingly, this was just a few years ago.

Now, Mission Bay, which encompasses an enormous parcel of land from CalTran and the ballpark down to the northern edges of Potrero Hill and Dogpatch, is the new face of San Francisco. Residential, commercial and industrial buildings are cropping up like the weeds that used to occupy the open expanse. Parklands are being developed. It’s not exactly Noe Valley, but it’s getting there.

The walk covered both shores of Mission Creek, the last remaining vestige of the old Mission Bay, long since filled in. If you would like to attend this tour, it will occur again on Wednesday, May 10; Saturday, May 14; and Monday, May 22, always at 2 pm. More photos (not from my cell phone, I promise) and notes after the jump.

As anyone who knows me knows, I am a proud member of City Guides, a group that offers free, volunteer-led walking tours all over San Francisco. I personally endorse all our wonderful tours, and recommend taking them whenever possible (especially…